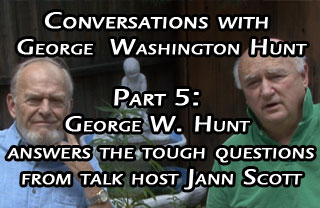 George Hunt answers tough questions by talk show host Jann Scott, covering the 4 part series of Conversations With George W. Hunt. Starting with Part 1 – Family Trusts and Foundations and the way rich people get away with completely avoiding taxes. In Part 2 – Scott Paper Co. and My Lost Job George answers Jann from his personal experiences on how the big corporations are the ones who need to do more to help the environment because they are the big cause of pollution. Part 3 Members of Congress Through Peace Through Law, Jann questions George about his claims on the members of the U.S. congress being treasonous in their unreserved choice to be controlled by the New World Order. Last but not least, Jann asks about the topics that George talks on in Part 4 – Congress Does the Wishes of the Federal Reserve, and George explains how he was trying to tie in the relationship between the Federal Reserve and the American People.

Alex welcomes to the show George Washington Hunt, a former naval officer and an official host at the UNCED 4th World Wilderness Congress. Hunt is educating the public on a secret bank set in motion by international financier Edmond de Rothschild and Maurice Strong. Hunt exposes this conspiracy in his 30 minute documentary, The Big Bad Bank.
http://www.thebigbadbank.com/
http://www.infowars.com/ 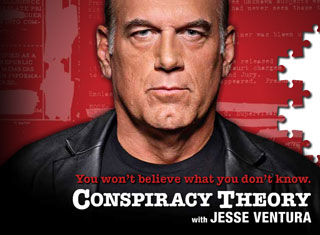 Premiered Wed, December 16 at 10P – Whether global warming is real or not, it’s believed some people are using the issue to make billions of dollars, start a one-world government and control our lives, from the cars we drive to the foods we eat. Jesse Ventura starts with Al Gore and goes far beyond as he uncovers the evidence that leads to one man thought to be behind the global warming conspiracy.

Most HAARP articles I have read agree that a dangerous and deadly weather control system has been created. The folly of slicing into the ionosphere with a slight bit of energy and send huge electromagnetic beams into the earth or kill crops and wildlife by diverting water-bearing weather away from any region is playing with Mother Nature with high levels of risk and ignorance. What drives people to conceive of such billion-dollar inventions while the poor starve?

The potential fruits of ionospheric weather control are certainly not worth taking any risks with such a system. BUT HERE IS WHERE WE ARE BEING MISLED: Do you notice how many times various HAARP articles refer to the “MILITARY” as being the bogeyman? It is my suspicion that the Rothschild World Conservation Banking/Conservation Conspiracy could realaly use HAARP technology extensively and CREATE global warming, extreme weather incidents and other Al Gore predictions. Lots of expensive machinery, bigger than the defense industry, will be needed to fight global warming, acid rain, CO2, etc. The rich elite will use HAARP before the military will.

Could the authors of many HAARP articles unknowingly be pointing the finger and blaming the military for HAARP’s insane project where the real beneficiaries of HAARP power and might may actually be the “Enviro-Aristocrats”. As you may know from my www.thebigbadbank.com DVD’s, the aristocracy now controls both the world conservation movement and its avowed enemy, world industrial growth and development.

Persons who research and determine that the global warming theory is a hoax and is designed to be used against countries which contain what the Club of Rome calls “the lesser races” or, as the international banker in my DVD called us: ” The cannon fodder which unfortunatly inhabit the earth”. Africans could die by the millions. Targets of up to two billion population reduction have come up in the Club of Rome pronouncements. Careful: Those who say there is no global warming could later be singled out by the ruling class as an enemy against the people after HAARP has accomplished its evil task. Al Gore will be proved correct, Africa will roast, the plush ski areas will receive tons of snow and farms will close

Lehman brothers went down today one year ago and nearly took the whole country with it. You have read and heard from me how the New World Order establishment sends their spies into into leadership positions in both sides of an argument or an issue. When the aristocracy infiltrates both sides of an important issue they wind up controlling the synthesis, the final argument of the two opposing sides. That is why aristocrats have involved themselves so much in environmental causes. They come up with organization names such as The World Wildlife Fund and The Sierra Club as well as paid proponents of conservation such as Al Gore’s chilling, doom-laden prognostications, much like chicken-licken’s delusions that “the sky is falling”.

The aristocracy is, of course, has been heavily dependent on profits and dividends from industry to swell their already-gorging larders, so they’re already heavily-emplaced in the “growth and development” industrial side.

To make their program as profitable as possible it will be required to create industrial pollution on a continuing basis while the pseudo-conservationists scream for more tools to fight for the environment.

Trillion-dollar programs will fail to clean up the environment, but the environmental crowd will reap huge contracts and dividends from far-fetched conservation remedies. Get it? The industry vs. environment crowd will maximize their profits by fooling the masses into thinking that “the sky is falling”.