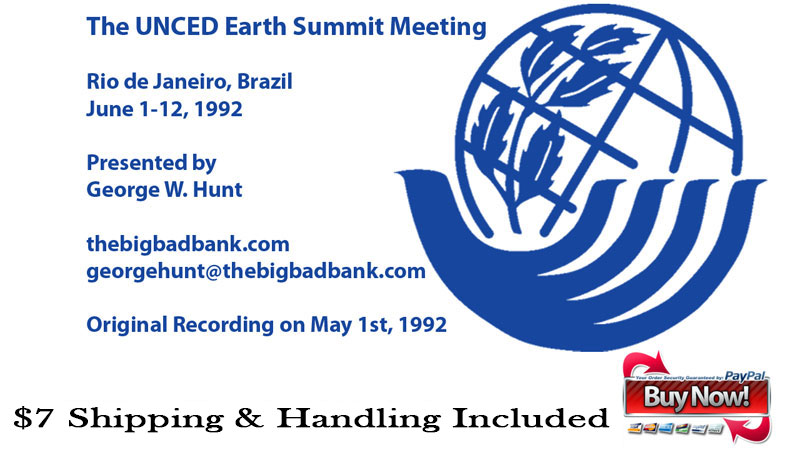 UNCED Earth Summit 1992 Pt. 1 – In Our Hands
George Hunt introduces the United Nations Conference on Environment and Development (UNCED) which takes place in June of 1992 in Rio de Janeiro. This video will show strong evidence that the persons running the UNCED Earth Summit are actually setting a net to place the power over the Earth and it’s people into the hands of the World Order. We also learn about some events leading up to the Earth Summit and people involved behind the mask.

UNCED Earth Summit 1992 Pt.2 – What is the World Summit Meeting and Who’s behind it?
The UNCED world summit meeting is a key event in a series of environment meetings which have occurred since 1972 most of which were convened by Maurice Strong and the Rothschilds. George hunt goes on to explain about previous Earth Summits and provides some examples of phrases, documents and audio recordings from the meetings.

UNCED Earth Summit 1992 Pt. 3– The First, Seconds, Third Worlds
The First World, Second World, Third Worlds are used to describe blocks of political entities. The First World is the capitalist countries of Europe and North America who are industrial and therefore the world’s biggest polluters. The Second World is the Soviet Union and the Eastern bloc countries. The Second world countries are going to be saved by a Second Marshall plan created by the Rothschild Group, the truth comes out and we see examples of it in effect already. The Third World are those countries who have emerged since World War II, they are young and easily fooled and the World Bank drains their assets even faster than they can blink. In an article we see, Maurice Strong suggest that the Third World poor countries may start an uprising at the World Economic Forum held in Switzerland and demand that the First World countries sign an agreement to reduce their impact on the environment.

UNCED Earth Summit 1992 Pt. 4 – The Fourth World
The Fourth World is referred to as the coming One World Government where there are no more First, Second and Third World governments, it will be a return to a society much like Caesars or Babylon or the Third Reich. The UNCED Earth summit will link environment with industry and they will be the masters of who gets what and when. We hear a recording from the 4th world Wilderness Congress where Maurice strong introduces Baron Edmund de Rothschild as the positive synthesis between the Environment Conservation on one hand (Thesis) and Economic Development on the other (Antithesis).

UNCED Earth Summit 1992 Pt.5 – Politicians and Bureaucrats Exposed
David Rockefeller and William Ruckelshaus were speakers at the 4th world wilderness congress, Ruckelshaus being the representative of the Environment and Rockefeller being the representative of Development. The Hypocrisy behind this matchup is that they are also the men who make the Laws behind what they can do to the environment. So Who’s Behind the UNCED Earth Summit Meetings? This question is as easy as following the money. In an audio recording we hear Edmund de Rothschild suggest we develop ways to maintain the temperature of the Polar Ice Caps with inoperative and modern technologies as an example of what the might do with the money in this bank.

UNCED Earth Summit 1992 Pt. 6 – The 4th World Wilderness Congress Audio Recordings
We listen to a voice recording from the 4th WorId wilderness congress of Edmund de Rothschild who talks about the concept of the bank they have planned during this conference and how the wilderness has a part of their investments, created by Michael Sweatman.