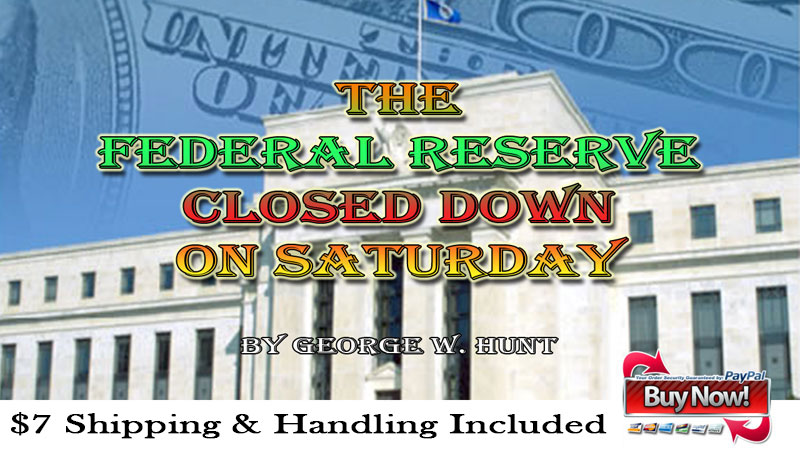 Today is November 9, 2010. Lots of events have lately occurred against our country. Everyone who is aware of the evil in the Federal Reserve is hoping Bloomberg of Ron Paul will stop its course. If you viewed my presentation about the Kennedy Bonds, then you know there is a quick method which President Kennedy employed. He signed Presidential Executive Order 11,110 in 1963 to create our own U.S. Currency. By his act he shrugged off the dominating Federal Reserve Bank franchise. But before his twenty-dollar bills were printed and circulated; he was dead, killed at the direction of the stockholders of the private European Federal Reserve Corporation Bank. Within days President Lyndon Johnson verbally reversed Kennedy’s order to print United States currency which, by the way, is contrary to the Constitution. The Treasury Department quickly implemented Johnson’s orders and removed Kennedy’s U.S. Money from circulation within months.. The sinister Senate did not do the right thing to uphold Kennedy’s Executive Order. The fear-ridden, vain group of Senators, afraid of the Elders of Zion of banking, let the issue lie, permitting the Federal Reserve and their ilk in the Treasury Department to bring us to our current bankrupt condition. But look at it. What Senator wants to be murdered? And what Senator wouldn’t covet a bribe for his vote. And what Senator is against the Fed anyway? Later, you will see why the cry of “End the Fed” has already occurred. Ronald Reagan diminished the power of Executive Order 11,110 in 1982 but Kennedy’s Order was never overruled by the Senate. Any President can choose to issue the Order to make our own money any time he or she wishes. And what president would choose to give his life for his country for doing what President Kennedy got murdered for? Lyndon B Johnson? He verbally countermanded Presidential Order 11,110 soon after Kennedy died. Ronald Reagan? He played with the wording a little to dilute it. William Clinton, Rockefeller? How about George Bush Sr. and George Bush Jr.? Carter? Obama? Were there any patriotic Presidents among them to pull the plug on the Fed? Did the President do it again like Kennedy?

Suppose a brave, patriotic person somehow became President through his popular election slogan of “End the Fed”. During the election time he promised to free Americans from the domination of the “Federal Reserve. He told the voters he would sign another Kennedy order and print the Order into the daily Government Federal Register. He knew that the easy part was writing the Order and printing it. After that, though, he would be a marked man ready for destruction by the Federal Reserve Corporation. What President since Kennedy would give his life for his country? I once presumed that every President had a basic value in every American’s heart. Now I wonder.

Suppose next that the President’s money presses begin rolling out the U.S. Money. At this point the powers of the Illuminist European Bankers are at their weakest since every Senator’s core beliefs in our Country will be exposed to the light if the Executive Order is forced to a vote in the Senate. If he votes against the President’s Order, the country will despise him but the Fed will love him. He preferred a temporary despisement versus death by the Fed. Anyway, the Press will soon whitewash the Senators’ treason into a patriotic gesture and the Americans will be taught to believe it..
The Federal Reserve is not a part of the United States government. It is a private corporation of false-Jewish bankers who say they are Jewish but they are not Jewish. People of Israel call them half-Jews today. The Herod Dynasty were half-Jews and converted to Jew by force. These people who follow a Luciferian religion are at the verge of consuming the power of the world for themselves. Their ancestors were currency traders at least 2,000 years ago. Remember when Jesus Christ scourged the money-changers in the Temple with a whip and knocked over their currency tables? They had a profitable currency exchange monopoly in the Temple to exchange the local currencies of the faithful into the only acceptable coins to God in the Temple. “You shall not make my father’s house a den of thieves! Jesus yelled. Interestly, Andrew Jackson shouted these same words at the money-changers shortly after he barely escaped assassination by the assailant hired by the European money changers. His pistols didn’t fire..

Here are the names of the original owners of the Federal Reserve Bank Corporation according to many sources: The Rothschild Group of banking houses control over 53 percent of the Corporation which, in turn, controls our United States Federal Reserve system. The original stockholders of their greedy group are : The Rothschild’s of London and Berlin; Lazard Brothers of Paris; Israel Moses Seaf of Italy; Kuhn, Loeb & Co. Of Germany and New York; Warburg & Company of Hamburg, Germany; Lehman Brothers of London; Goldman, Sachs of London; Rockefeller Brothers of New York; and the Bank Israel Leumi of Tel Aviv and London.

Actually, the Rockefellers are cousins of the Rothschild’s: The Rothschild’s financed their vast monopolies. Anagrams of their names strongly suggest that the Rothschild and Rockefeller names both evolve to “Redchild”, the original family name of their original ancestor, Esau. They are called the “Synagogue of Satan” in Revelations 2 of the New Testament. Descended from the ancient Esau-Herod-Rothschild culture, they certainly are not the true Jews of Israel’s true hope. These ravenous beasts have put together most of the wars and major revolutions since, at least, the horrible French Revolution. Every American President who has defied them to control our currency has been assassinated. Only Andrew Jackson escaped their evil wrath when both pistols of the assailant failed to fire. Jackson beat the assailant up with his cane right on the spot!

Once a President enacts an Executive Order to start printing American money, a Senate majority vote is required to override his Order. President Lyndon Johnson verbally remanded Kennedy’s Order almost immediately after Kennedy’s death but the Senate never officially countermanded it by the two-thirds majority required by the Constitution in these matters. No Senators dared say a word against Kennedy’s bold Executive Order. The cowards let a sleeping dog lie. If a Senator dared to vote against the Fed and uphold Kennedy’s Order, various dangers, including murder, would certainly await the Senator. So the Senator thinks “Is it better to be a live dog than a dead lion?” Why should I die for a lost cause? An why should I pass up this fantastic bribe promised to me if I vote against Kennedy’s order? A fantastic bribe from the European pigs or a possible death sentence from the Federal Reserve hit men?

Yes, we can get out from under the evil Federal Reserve bankers very easily. But, really, how many public servants do the right thing for America? At this point in time the idea of stopping the Fed is a pipe dream. Our currency and economic freedoms probably departed with the Kennedy tragedy. All of this “End the Fed” stuff can cease right now. We do not have a functioning Federal Reserve anymore. The money-changers have moved the Fed to a new Central Bank, leaving our country in a flood of fiat currency and bankruptcy.
According to my original videotape of 1988, our money will eventually be regulated and circulated from Canada. Read about M&T Bank Corporation headquartered in Buffalo, New York. It’s grown into a giant right just across the border from Toronto, Canada. Two other huge banks are also in Buffalo—First Niagara Bank and Midland Marine Bank of London. Together, they have merged so many eastern banks into their syndicate that they control retail banking throughout New England, New York, Maryland, and Delaware to name a few areas. They are moving the power and cash of our country into the Federal Reserve to Canada.

I suspect the Fed has completed their evil work. I remember a precept in international finance that a new Central Bank should be placed next to the country of the old Federal Reserve bank that they are replacing. I think it had to do with enabling smoother currency flows and barter transactions. Another precept: Their currencies of both banks should be in parity with each other. This occurred recently when the Canadian and US dollars equaled one dollar in each country. I predict that the Federal Reserve Bank of the U.S. is close to being replaced by a Canadian Central Bank– perhaps in conjunction with the Royal Bank of Canada. I foresee that the regulation of our currency will eventually come from Canada. As Canada is a commonwealth country, we will become yoked to the British Empire, the largest empire yet created by man. On October 20, 2010, a significant event took place when Shalom Ben Bernanke made his speech from Jekyll Island, Georgia, the location where the Fed was put together by their scum in 1913? I think it was staged from that location to signify that the Fed had done his work against us and it was time for our Fed to disappear. GWH.
George Hunt