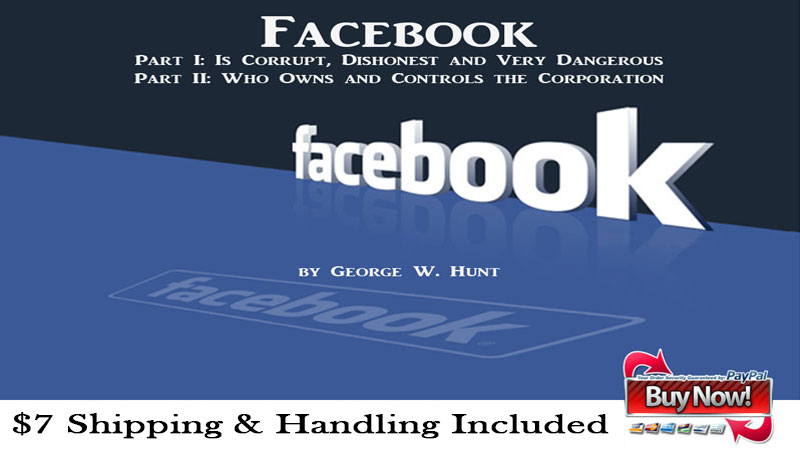 Hello, my name is George Hunt. This is Part I of a two-part expose of Facebook Corporation. I have diligently studied the psychopathic European international banking elite for 40 years. Most of them have no respect for the rights of the common people. They are an elite, criminal, group of filthy rich Jews who are not Jews. History proves that wars, assassinations, currency destruction, most global chaos and the destruction of entire societies, have been hatched by these ravenous beasts that haunt society. I have traced the ancestry of these bragging beasts back to the families of Herod the Great and even farther back to Esau, son of Isaac, in about 1800 BC. God said he hated Esau even before he was born to Rebecca, their mother. Esau was named Edom because he was colored Red, which means Red Child, when he was born. I believe that the names of Rothschild and Rockefeller are anagrams for Edom or “Red Child”, that is, Rot Child and Rocke (red) Feller (child). Now these hated families are hatching a new, demonic plan. It is called Facebook Corporation. Founded by a sly vicious, unethical, immoral liar, now the venture capitalists, the sly liars who now own Facebook will torment society. The banking elite will not only own and control Facebook, they’ll own the communication system similar to George Orwell’s prophetic picture of Big Brother.

Every piece of information we text or email is stored in Facebook’s memories. If someone wants to pay Facebook for a deep psychological profile of your life, Facebook will someday provide the information, including a psychoanalysis a la Microsoft and PayPal software. Court prosecutors are already using cell phone histories against the defendant. Someday the Constitution and the Bill of Rights will be a thing of the past. Goodbye privacy; our lives will someday become as Satan directs. IBM, Microsoft, PayPal, Rothschild, Rockefeller, big bankers, they’re all in this together. Rothschild’s puppet, Comrade Lenin told us once “NWO life will be like a boot kicking you in the face every day”.

Wikipedia’s exhaustive 20-page report about Facebook Corporation provides many of the facts that make me conclude that Facebook’s owners are actually a bunch of greedy, dishonest sociopaths. Look at it: Facebook Corporation’s founder, Mark Zuckerberg, has been sued for privacy and patent invasions since 2004, including stealing a trusting client’s source code. Facebook lost the case and had to pay $65 million in restitution. Now Zuckerberg may lose a securities fraud case. How ironic it is that a person who has little regard for privacy would be the inventor and CEO of a vast social site!

President Obama warned us to not put anything personal into Facebook. Every item one puts into Facebook is a permanent, obtainable, record for the Facebook owners to use against you.

I’ll tell you the names of Facebook’s owners in Part II of this two-part presentation: Does Goldman Sachs ring a bell? How about Rothschild, Warburg, JP Morgan Chase, Rockefeller, Bank Leumi of Tel Aviv, PayPal, and Microsoft? The names of the venture capital investors of Facebook are hidden behind street names of banks and venture capital groups, but I will do my best in Part II of this two-part warning letter about Facebook Corporation. Thank you for listening thus-far; and now watch Part II: Who are the individuals that own Facebook Corporation?